A static timing check with the engine stationary is never fully accurate. It does not allow for wear or backlash - working clearance - in the distributor drive.

The work is done in close proximity to drive belt(s) and pulleys - take care that loose clothing or your hair does not become entangled.

A stroboscope is simply a light connected to the sparkplug of the cylinder that is used for timing.

Every time the plug fires, a timing mark on the crankshaft pulley is just passing a fixed pointer on the engine.

The strobe light is a xenon or neon flash tube, which flashes very briefly at the moment of firing, so that the timing mark is lit only when it is opposite the fixed pointer.

As this happens again and again, the effect is to make the mark appear stationary.

If you advance or retard the ignition, the mark appears to move a short way and then stop in a new position.

Buy or hire a xenon strobe if possible, for it is brighter than the cheaper neon type.

Most strobes have a metal spacer connection which fits between the sparkplug and the plug cap, but more expensive models have an 'inductive trigger' that clips around the plug lead and can be fitted and removed while the engine is running.

The timing must be set at an exact engine speed.

If your car has a tachometer - or rev counter - use this to measure the engine speed. Alternatively, use a separate unit - which can be read from under the bonnet.

Find out from a car handbook or a dealer the maker's stroboscopic timing figure, and which cylinder to use for the check (almost always No. 1).

Find also whether to measure with the vacuum-advance mechanism disconnected or not - the centrifugal-advance system is never disconnected.

You may be able to find out the whole 'advance curve' for different speeds. This set of measurements is always made with the vacuum advance disconnected, so it shows whether the centrifugal-advance mechanism is working properly.

If you cannot get a stroboscopic timing figure, use the static figure and set the timing with the vacuum advance disconnected and the engine idling as slowly as possible.

Work in a shaded place so that the light shows the marks clearly. Find the mark or marks that you need, and dot them with white paint or chalk so that they stand out.

Stroboscopic timing is usually done with the vacuum-advance mechanism disconnected. You can also use the strobe to check whether the advance is working properly.

Follow the manufacturer's instructions supplied with the timing light you are using. If it is the type that is powered by the car battery, make sure you connect the leads the right way round.

There is also a connection to the plug of the cylinder that is used for the test.

For the usual type, which fits between the plug and plug cap, first switch off the engine.

With the more expensive induction-trigger type, it does not matter whether the engine is running or not. Clip the connector round the plug lead.

If necessary, disconnect the vacuum-advance tube. Start the engine and get it to run steadily at the correct speed for the test.

If you are timing from a static figure only, temporarily adjust the carburettor idle-stop screw (See Adjusting an SU carburettor) to give the slowest idle speed at which the engine will run steadily.

Point the light at the timing marks. If the timing is right, the appropriate mark should appear stationary in line with the fixed pointer. If not, adjust the timing until it does so.

If you have an advance curve of figures for several speeds, you may have managed to get the timing correct for one speed but found that it is not right at other speeds. This is a sign that the centrifugal-advance system in the distributor may be faulty or sticking (How engine timing works).

Hold the distributor by the lower part of the body. If you hold it by the cap there may be a slight leak of high-voltage electricity even from the plastic outside of the cap, enough to give you a sharp shock. As an extra precaution you can wear rubber gloves.

Turn the distributor to advance or retard the ignition. If the number of degrees before top dead centre shown by the timing light is too small, advance the ignition by turning the distributor in the opposite direction from the way its contact-breaker cam turns.

Taking care not to disturb the distributor setting, tighten its clamp bolt. Start the engine again and give the timing a final check. 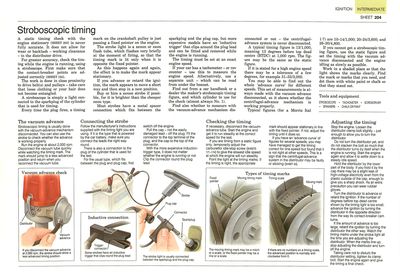