Tyres are put under tremendous strains when a car is being driven.

There are only four relatively small areas of tyre tread in contact with the road. They carry the car's total weight, and transmit to the road the power that drives and accelerates it over the many changes of surface and gradient encountered.

They must also transmit the forces generated by braking and cornering.

Because they are in constant contact with surfaces that are frequently abrasive, damaged and even broken, tyres are more liable to wear and physical damage than any other car component.

For safety's sake, keep a regular check on them - and on the wheels that carry them. Make it at least once a fortnight, and also before any long or high-speed journeys.

Badly worn or damaged tyres are both illegal and potentially lethal: they can cost you your licence - or even your life.

It is better to look over the tyres and wheels while they are on the car than not to inspect them at all. But for a thorough examination of the inside walls, the wheels should be taken off about once a year (See Checking, removing and refitting road wheels).

The tread is the obvious place to start looking for tyre damage. Begin by inspecting carefully the whole circumference for abnormal wear and flaws in the pattern.

Abnormal widening of the grooves, or the spaces between tread blocks, usually means that the tyres are ageing.

If a series of cracks is evident, replace the tyre - even though there may still be 1-3 mm of tread left.

Pay special attention to the small slots and cuts - known as 'sipes'. Look for embedded fragments of sharp flint and stones, or the nails and tacks that are the usual cause of punctures and can cause internal damage.

That sort of debris can be prised out with a screwdriver blade. But removing it may leave the tyre with a slow puncture.

Check for loss of pressure, and if it occurs have a tyre-repair shop take the tyre off the rim, inspect it, and make a permanent repair.

Look also for 'flats' in the tread, worn perhaps by severe emergency braking - when the tyre of a locked wheel slides on the road, wearing off the rubber and generating a lot of heat.

Abnormally severe wear at the tread shoulders or uneven tread wear are warning signs that should never be ignored.

They could be the result of more fundamental problems perhaps in the tracking or suspension and could soon lead to failure at speed (See Avoiding tyre wear).

Bulges in the sidewalls are signs of carcass damage. Long before cords are showing through, these tyres are unsafe at speed. Sometimes the damage may not be visible, so if you have suspicions - perhaps after hitting a kerb - but cannot see any exterior evidence, ask a professional tyre fitter to remove the suspect tyre and examine it.

Often, fractures are visible inside before they become obvious outside. Any break in the carcass construction means replacing the tyre. It cannot be repaired safely.

Tyres with treads of less than 1 mm deep are illegal in Britain. The treads must be at least 1 mm deep over 75 per cent of their tread width all round the tyre, and there must be evidence of some tread on the rest..However, most experts think this is not enough, and that it is unwise to drive on tyres in such a worn state.

Many other countries including most European and North American states - demand that the minimum tread depth should be present across the full width of the tread in contact with the road. European regulations are likely to come into force in Britain under EEC regulations.

A minimum of 1.5 mm is common, and 2 mm is strongly recommended in the interests of safety.

In practice, it is sensible to take a tread depth of 2 mm as the stage at which tyres should be renewed.

As soon as tyres begin to show signs of wear, make frequent checks. Even with new tyres, regular. checks can also reveal unusual wear patterns, which point to other problems.

You can make a simple check on tyre-tread depths with an implement such as a small screwdriver, which has a narrow, straight blade that will fit into the grooves between treads or tread blocks; you also need a millimetre rule or measure.

Put the screwdriver blade into the groove at right-angles to the tread surface, then use your thumbnail to mark the surface level on the blade. Taking care not to move your thumb, measure off the depth on your ruler.

Inexpensive tread-depth gauges are also available, which make checking even easier, and more precise. Make sure that the probe is extended fully, then insert the tip into the groove and press down. The tread depth can be read off on the gauge scale.

Check all round each tyre. Move the car slightly to include the sections of tyre on which the car was standing.

Some tyres are made with built-in tread-depth warning markers usually bars running across the inside of the grooves.

When the tops of the bars become flush with the tread, the tread depth is almost at its legal limit and the tyre should be renewed.

Most new tyres are radial-ply tyres. All reputable new radials are marked with the size and speed rating, cross-plies with the size only. Tyres without such markings are best avoided.

Generally, tyres have two size markings - the width of the tyre and the diameter of the wheel rim. The size may be given in inches or millimetres or a mixture of both; sizes solely in inches are on cross-ply tyres.

Letters interposed between the sizes are speed ratings, for example 155SR10. For radial-ply tyres speed ratings are: SR up to 113 mph, HR up to 130mph, and VR over 130mph.

On newer tyres with EEC approved markings, there is only one letter interposed - R for radial - and the speed rating letter is separate. A number beside it, such as 155R10 76 S, is the load index for the maximum tyre load in kilograms; 76, for example, indicates a 400 kg load.

Low-profile tyres also show the aspect ratio - the percentage of depth to width. For example, 145/70 SR10 means that the tyre depth is 70 per cent of the width. 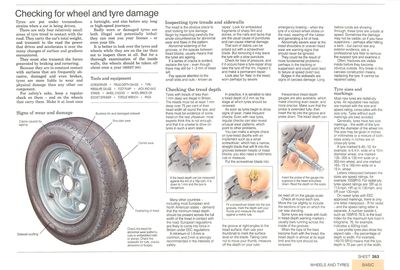 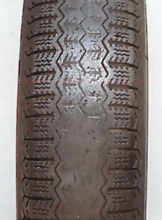 The best way to keep tyre wear to a minimum is to maintain correct tyre pressures for the load an...

Damage to a tyre sidewall or carcass can make the tyre useless, even though the tread is hardly ...