Damage to a tyre sidewall or carcass can make the tyre useless, even though the tread is hardly worn. A major cause of damage to wheels and tyres is debris on the road - such as pieces of broken silencer and objects dropped from trucks and lorries.

How tyres can be damaged

A nail or screw through a tyre not only causes gradual deflation, but the point may damage the interior wall as the tyre flexes against it, leading to eventual fracture of the carcass. A tyre with a sidewall penetration cannot be repaired satisfactorily.

An internal rupture can result when a tyre hits a kerbstone or an object in the road, although no damage may be visible on the outside. Eventually the tyre fails.

If a tyre is continually scuffed or bumped against the kerb during parking, sidewall abrasion can be so sever as to expose the casing cords. No matter how good the tread, the tyre is useless.

A tyre that has been damaged by rubbing against the bodywork is likely to have torn patches on the tread, or be heavily scored from jutting or damaged metal.

Separation of the tyre tread can result from under-inflation, which causes sever heating of the tyre shoulder. Other causes of tread separation may be deterioration due to age, oil or tar trapped in the tread, or rusting of steel belts under the tread.

Prolonged driving on an under-inflated tyre causes crushing and distortion of the sidewalls, with internal damage to the cords. The sidewall may eventually fracture and separate from the shoulder.

Spilled fuel, oil or solvent in a spare-wheel well can soak the rubber until the sidewalls appear smooth and wavy, and the tyre is so weakened that it cannot hold air, and so fractures.

When tyre sidewalls are crazed by high concentrations of ozone in sea air, the rubber is weakened and the tyre fails.

Avoiding them calls for a constant lookout when driving. They can pierce tyre treads and sidewalls, and even break off parts of the carcass of a tyre. A neglected cut that has penetrated to the cords allows moisture to enter, and can lead to deterioration and rusting of the cords, so weakening the tyre.

With vigilance, hazards can be seen in time for you to steer around them, or - bearing in mind that there may be other traffic close to you - at least slow down to avoid high-speed impact damage.

However, even a small, sharp flint, a natural and invisible hazard on the road, can cause a puncture. Prising such minor objects out of the tread during regular tyre inspections helps to prevent this.

If, despite all precautions, a tyre is punctured, never carry on driving with it flat. A proper, permanent repair should be made to the tyre as soon as possible.

Overloading your car has almost the same effect on your tyres as not having enough air in them. Never exceed the stated load capacity of the car or its tyres. Check with your car handbook for the maker's specific figures if you are in doubt.

Driving against a high kerb is another common cause of ruptured tyre casings and dented or buckled wheels. Driving hard over badly broken ground can have a similar effect.

Tyres can be damaged by the car bodywork. If the suspension is faulty, for example, the tyre may rub against a wheel arch. Or a tyre that is too wide for the car may catch on parts of the steering or suspension.

Failing to take notice of instructions for running-in tyres - restrained driving during the first 50 to 100 miles or so on new tyres - does not allow the tyre and wheel assemblies to settle to their normal running conditions.

During that period the tyre completes some final chemical changes which were taking place during the moulding and curing stages of manufacture. Subjecting a new tyre to maximum loading immediately may cause it to fail prematurely, and will certainly shorten tyre life.

Pollution in the atmosphere and on road surfaces - particularly in cities is harmful to tyres. Oil, tar, diesel fuel, petrol and paraffin all tend to soften the rubber, and may penetrate it quite deeply if not removed quickly. Clean them off with water and soap, or a mild detergent, such as washing-up liquid.

Strong sunlight hardens and cracks tread and sidewall rubber over a period of years. Sea air particularly, with its high concentration of ozone, can damage tyres, causing crazing - a network of small cracks - on the sidewalls.

Cars or caravans parked near the sea for any length of time should have their wheels covered.

A punctured tyre must, by law, be permanently repaired as soon as possible. Get it done by a garage or tyre specialist with the necessary equipment. A tubeless tyre repair kit can be used as a temporary measure.

Inner tubes, if fitted, must also be permanently repaired - or preferably renewed. This, too, should be done by a specialist.

To make a permanent repair, the tyre has to be removed from the wheel and thoroughly inspected both inside and out.

It can be repaired only if penetration damage is not too extensive, and if the under-inflated running that resulted has not damaged the internal structure of the carcass.

Make sure the wheels are balanced - preferably on the car - after any tyre repairs. 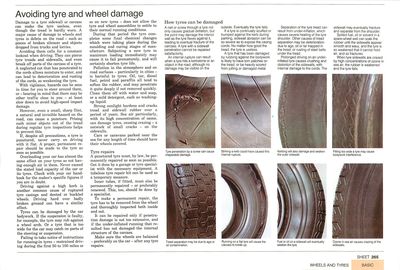 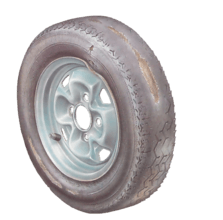 Checking for wheel and tyre damage

Tyres are put under tremendous strains when a car is being driven. There are only four relativel...