The dynamo is a robust and simple type of generator which was fitted to many earlier cars. Most modern cars are fitted with an alternator.

If you suspect a fault in the dynamo, check all the connections to it with a circuit tester.

Check also that the dynamo actually turns when the engine is running, and that the drive belt is adjusted to its correct tension, and is not slipping (See Checking, adjusting and refitting drive belts).

Checking output with a voltmeter or tester

Make these checks with a voltmeter if possible. If not, use a circuit tester or test lamp.

The instructions are for a car with a negative (-) earth system. For a positive (+) earth system, read negative for positive, and positive for negative.

Connect a voltmeter across the battery terminals while the engine is running. Have a helper rev the engine up from idling speed.

The battery voltage should rise, or the tester lamp (or headlamps) should brighten.

If it does not, and if checks on connections and the drive belt have been satisfactory, switch off the engine and disconnect the two cables from the endplate of the dynamo.

The terminals are usually marked D and F. They are of different sizes, but label them if necessary, to avoid confusion.

Use a short length of fairly heavy cable to clip the D and F terminals of the dynamo together. Start the engine and let it idle at not more than 1,000 rpm.

Connect the positive lead of the voltmeter to the D terminal and the negative lead to earth. The meter should read about 14 volts (or the 12 volt bulb should shine brightly). If so, the dynamo is working.

Reconnect the dynamo cables, leaving the short bridging cable in place. Disconnect the cables at the control-box end, where they are also labelled D and F.

Start the engine and allow it to idle at not more than 1,000 rpm. Connect the positive lead from the voltmeter to the cable disconnected from the D terminal at the control box to see if it is sound.

Then do the same with the cable from the F terminal at the control box.

If the cables are sound, and if the dynamo is charging as previously checked, the meter should read about 14 volts and any fault must be in the control box.

Checking a low charge rate or failure to charge

If the first output test (see left) showed that the dynamo was not charging, disconnect the D and F terminals at the dynamo endplate again, but remove the link between the terminals.

Start the engine and have your helper run it up to 2,000 rpm (medium speed).

If the car is not fitted with a tachometer (rev counter), 2,000 rpm is about the speed of the engine when the car is travelling at 30 mph in top gear.

Reconnect the voltmeter between the D terminal and earth.

If the voltage reading is 2 to 4 volts - enough to light a torch bulb but not a 12 volt car bulb in a circuit tester the fault is in the field coil or the brushes.

If there is no voltage the fault is in the armature or the output brushes.

In either case, check the brushes and commutator (See Replacing dynamo brushes). 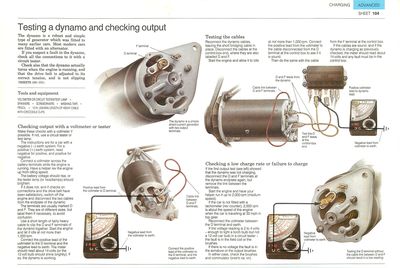 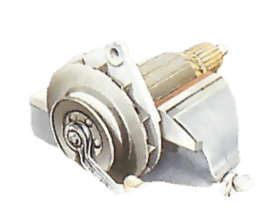 Removing and refitting a dynamo pulley

The most common reason for removing a dynamo pulley is to fit it on a new dynamo — most...