The most common reason for removing a dynamo pulley is to fit it on a new dynamo — most replacement dynamos are supplied without one.

When refitting an old pulley, or fitting a new one, be careful not to bend or damage it. The surfaces inside the V where the belt runs must be smooth.

In many cases the pulley incorporates the dynamo cooling fan: its fins must not be bent or broken.

Usually it is best to take the dynamo out of the car before removing the pulley, though sometimes there is enough room to work with it still fitted.

On most dynamos the pulley is a tight fit on the end of the armature shaft. It is held in place by a movable metal key between pulley and shaft, and secured by a nut.

The shaft may be tapered or parallel and is slotted to take half the key. The hole in the centre of the pulley is also slotted in order to take the other half.

That type of locating device is called a Woodruff key.

The pulley nut is usually very tight and is recessed into the pulley. Use a socket or ring spanner to free it.

If the dynamo is still on the car, free the nut before removing the fan belt, which helps to hold the pulley steady against the force of the spanner.

You may also need to engage bottom gear to stop the engine turning - but be sure that the ignition key is out.

If you fail to move the nut, remove the dynamo from the car and dismantle it (See How to fix a dynamo).

Clamp the armature in a vice, using pieces of wood or some other form of packing in the vice jaws to protect it. They should hold it firmly enough for you to free the nut.

Do not lose the Woodruff key.

Removing a pulley with the dynamo out

Undo the pulley nut by just a few threads, then, holding the armature in one hand, gently tap the nut with a soft-faced hammer to force the shaft out of the pulley.

If this fails, reassemble the dynamo, so that the front cover is supported, and grip it in a vice, then remove the nut.

Before refitting the pulley, tap the Woodruff key well into its slot (curved edge down), with the front end slightly lower than the back, so that the slot in the pulley hole engages with it easily.

Take care when tapping it in not to make any burrs which may stop the pulley fitting over the key. It is a good idea to clean the sides of the key with a file before tapping it in, to ensure that there are no burrs.

Line up the slot in the pulley with the Woodruff key in the shaft, then push the pulley home on the shaft. Usually it will be forced fully home as you tighten the pulley nut; however, it may be necessary to tap the pulley on to the shaft with a soft-faced hammer far enough to start the pulley nut.

Some dynamos may have a spacer or shim between the pulley and front plate: do not forget to replace it.

After refitting the dynamo, check that the pulley is in line with the fan and crankshaft pulleys.

Sometimes the dynamo can be mounted on the wrong side of its pivot bracket: if it is put on the wrong way, its pulley could be out of line with the others. There may also be spacer washers between bracket and dynamo. These, too, must be replaced in their original positions, or the pulley will be out of line. 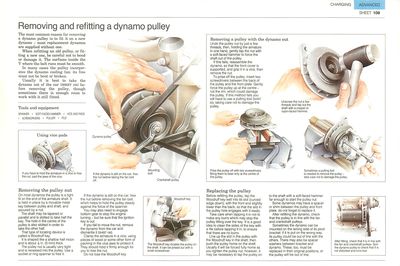 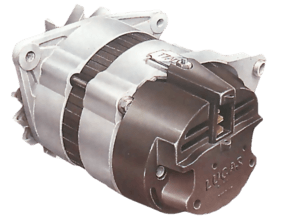