All cars have a fan to help cool the coolant as it passes through the radiator. On most cars, the fan is driven directly by the engine, usually via the generator drive belt. But this arrangement means that the fan always runs at the same speed as the engine. This has several disadvantages.

First, the fan runs as soon as the engine is switched on and is cold. This is when the engine needs to warm up as soon as possible for maximum efficiency, and having the fan running delays this process.

Second, when the car is travelling fast and the engine is running at high speed, the fan is also turning over at its fastest. But in these conditions, the airflow through the radiator is enough to keep the engine cool, so the fan is being driven for no reason - all it is doing is wasting power.

The solution is to fit an electric fan driven by a motor. The fan is switched on and off by means of a thermostatic sensor switch fitted to the cooling system.

Details of fitting an electric cooling fan differ for front-wheel-drive and rear-wheel-drive engines. This sheet looks at rear-wheel drive fans. The other type will be covered in a later Projects sheet. 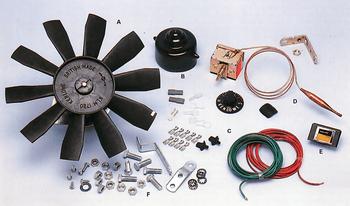 Fitting an electric fan to a side radiator

Fitting an electric, thermostatically controlled fan in place of the mechanical, engine-driven t...