The low-tension (LT), or primary-ignition, circuit consists of the battery, ignition switch, contact breaker, and the primary winding of the coil.

Check that all connections are clean and tight. Clean the connections if necessary, and smear the battery terminals with petroleum jelly - not grease.

Ensure that the battery is fully charged and that the electrolyte is above the plates. Test it with a hydrometer: the specific gravity should be well above 1.230.

For a less accurate check, switch on the headlights and watch them while a helper works the starter. They should dim only a little, and the starter should turn at its usual speed.

If the lights dim badly while the starter turns slowly, either the battery is low or its connections are unsound. Re-check its connections, including the engine earthing strap (See Checking battery leads and connections); if necessary charge the battery.

For further tests you need a voltmeter or multimeter - although you can make a rough check with a test lamp and leads.

Instructions here are for the more common negative-earth system: with a positive-earth car read - for + and + for - throughout.

The voltage reaching the coil may be 12 volts, or about 7 volts if the coil has a ballast resistor.

Most electrical equipment works on 12 volts, but most modern cars have a resistor in the ignition system to assist starting.

The coil in a ballast-resistor system is rated at 7-8 volts instead of 12 volts. When the starter motor is operating, the coil is fed with 12 volts from the starter.

The overload produces a very large HT spark for the sparkplugs at the critical starting time.

Once the engine has started, the coil is fed in the usual way from the ignition switch. To stop the coil from burning out, the 12 volts from the switch is usually passed through a resistor block (mounted on or near the coil), which reduces the voltage.

Some cars have, instead, a special high-resistance wire between the ignition switch and the coil to reduce the voltage.

Make sure all connections are clean and tight. To check that voltage is reaching the coil, connect the voltmeter between the + or SW terminal of the coil and earth, and switch on the ignition.

The meter should read nearly 12 volts, or about 7 volts if the coil has a ballast resistor.

If there is no voltage, there is a break in the circuit between the battery and the + terminal. Possibly the ballast resistor is faulty.

If the previous test shows no fault, test the primary winding of the coil.

Remove the distributor cap and wedge the contact-breaker points open with a piece of plastic or card.

Connect the meter between the or CB terminal of the coil and earth, and switch on the ignition. Again the meter should read about 12 volts.

If it reads zero there may be a break inside the coil winding, or a short circuit to earth inside the distributor or in the LT lead.

Check further by disconnecting this LT lead and repeating the test. If the reading is zero, and the ballast resistor is sound, the coil is broken and should be replaced.

If the reading rises to about 12 volts, the distributor or its LT lead may be short circuited to earth.

Check that the lead looks sound and the connection is clean and secure; check in the same way the short wires between the distributor LT terminal and the contact-breaker terminal post, and between the points and the condenser.

Look at the condenser itself, which might perhaps be short circuited to earth. Remove it from its mounting and check the voltmeter reading. If it is correct, the condenser is faulty; renew it.

Make sure that the points are assembled correctly (See Fitting and adjusting contact-breaker points): mistakes such as leaving out insulating washers can cause a short circuit.

Close the points. Leave the meter connected between the - or CB terminal of the coil and earth. Switch on the ignition. The reading should be zero.

Any voltage, even a very low one, may be caused by one or more faults, such as, dirty or oily points; wrongly set points not closing properly; points of the wrong type for the distributor; a bad earth connection between the contact-breaker baseplate - or the whole distributor - and the engine.

Other causes can be a previously unnoticed break in the lead between the distributor LT terminal and the contact-breaker post, or even in the LT lead from coil to distributor.

Eliminate these possible causes one by one to reveal the fault. 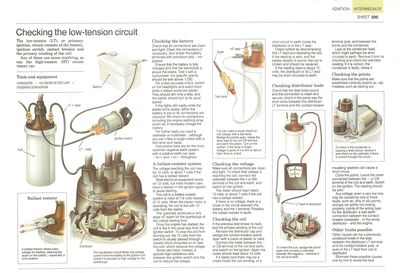 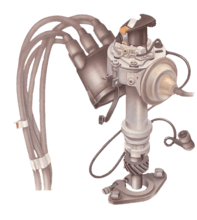 Removing and refitting the distributor

On some cars, because of limited space, the only way of replacing the contact-breaker points or ... 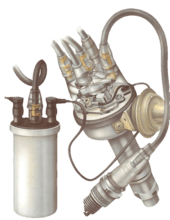 The high-tension (HT) or secondary circuit carries high-voltage electricity. It runs from the se...