These by-products of combustion are expelled as part of the car's exhaust gases into the atmosphere where they cause pollution.

In recent years, public concern about atmospheric pollution, and imminent EEC pollution-control laws, has led to car manufacturers trying to find ways of reducing the level of these gases in car exhausts.

Lean-burn engines are designed to produce a lower level of harmful emissions by better combustion control and more complete burning inside the engine cylinders.

Catalytic converters clean up the exhaust gases coming from the engine. Catalysts are the older of the two systems, and have been used in the US and Japan for some years.

Catalytic converters are fitted by the car manufacturer downstream of the engine in the exhaust system. It looks like a slightly swollen silencer and contains a fine metal or ceramic honeycomb, coated with platinum or a related metal, across which the exhaust gases flow.

The platinum initiates a chemical reaction in which the harmful exhaust constituents are converted into harmless nitrogen, carbon dioxide and water vapour.

The problem with catalytic converters is that they sap engine power and reduce fuel economy. They also lead to increased maintenance costs.

Another drawback is that the catalytic system needs unleaded petrol to work properly, because any lead in the exhaust gases quickly ruins the catalyst's efficiency. And some European countries, such as Britain, have none or very few outlets for unleaded petrol, with little hope of establishing a comprehensive network for distributing the new fuel in the near future.

Inside the CVH combustion chamber

Ford's lean-burn engine, based on the CVH, has a combustion chamber which is kidney shaped — it looks rather like an off-centre hemispherical chamber.

This type of design ensures good breathing, and the enhanced 'squish' effect means that the fuel and air will be well mixed for ignition. The mixture is forced up and sideways into the kidney shape of the chamber, rather than just being pushed into the more regular hemisphere of the earlier design.

These problems have forced car manufacturers to look elsewhere for ways of reducing exhaust emissions. The most obvious avenue for reducing emissions is to burn less fuel in the first place.

This requires an improvement in thermal efficiency, which is now very difficult to achieve because all the readily available routes have already been implemented.

One remaining possibility is to produce a 'leaner' mixture, namely to reduce the proportion of fuel in the fuel/air mixture entering the engine.

Petrol burns best in a standard car engine when it is mixed with air in the proportions 14.7:1 - nearly 15 parts of air to every one part of petrol. In practice the mixture strength varies between about 13:1 and 16:1, depending on the speed of an engine and its load at the time. At these mixtures, engines produce fairly high levels of harmful exhaust gas emissions, particularly during initial acceleration.

When you try to move away from the ideal fuel/air ratio, the engine's running is affected - if the engine is fed too much fuel it produces smoke, wears out quickly and is expensive to run. If the engine is made to run too lean, combustion becomes extremely variable from one cycle to the next, exhaust gas temperatures rise because of the persistence of flames from 'late-burn' cycles, and the engine starts to misfire frequently. All of these result in high levels of hydrocarbons in the exhaust gases.

To overcome the difficulties in making an engine run well on leaner mixtures, the air/fuel mixture needs to be more intimately mixed and the actual spark timing and combustion process needs to be very finely controlled.

To this end, some car manufacturers are fitting engine management systems where sophisticated electronics control both the ignition and the fuel delivery systems. This makes it possible to make sure that the spark plugs fire at just the right moment to ignite a fresh fuel/air charge, which may otherwise be reluctant to ignite.

Also under development are engine parts made of new materials that have greater heat resistance, such as pistons made of ceramics. But most development is going into ensuring that the air and fuel are well mixed.

In reducing the proportion of fuel in the mixture entering the engine, car manufacturers have encountered problems with misfiring and incomplete combustion which have, in some cases, increased rather than decreased fuel consumption.

To get round these problems, the industry has tried different ways of `stirring' the mixture just prior to ignition, with the aim of promoting faster burning and more complete combustion.

There are three main ways of stirring the mixture. First, the engine's inlet ports can be shaped to cause swirl - a technique borrowed from direct injection diesel engines. Second, a deflector, or 'fence', around which the mixture has to flow, may be positioned near the inlet valve or valves. And third, the combustion chamber itself can be made smaller than the cylinder bore to create what is known as a 'squish' effect - under compression from the upcoming piston, the fuel / air mixture has to squeeze itself into the combustion chamber, and this increases the density of the fuel droplets in the chamber.

Working out how best to design the engine so it can cope with very lean fuel mixtures is a very difficult process. Part of the problem is trying to see what actually goes on inside a combustion chamber when the fuel/air mixture is burning, particularly when the throttle is rapidly opened or closed.

So researchers are now using a quartz window in the combustion chamber, combined with a cine camera and complex computer programming, to see exactly what is going on inside. From this they can tell how and where the flame is spreading, which gives an indication of how fully the mixture is burning.

The current generation of lean-burn engines run on ratios of around 17:1 or 18:1, and the next generation should run with ratios averaging 20:1 or 22:1.

But lean-bum technology still has some way to go before it fully meets the proposed EEC laws. Some manufacturers are proposing to use a combination of a catalyst and a lean-burn engine to meet the demands of the new regulations.

Like Ford's CVH, the Fiat 2 litre CHT engine is derived from an existing engine, the Fiat twin-cam, a design that has been around for some years. CHT stands for Controlled High Turbulence, which describes how the air and fuel is mixed thoroughly before combustion. Mounted in the inlet manifold is a butterfly flap.

At full throttle, the butterfly is open and the fuel/air mixture follows its normal route along the inlet manifold to the combustion chambers. But at light throttle, a connection to the throttle closes the butterfly (apart from a small cut-out which allows some of the mixture through). Most of the fuel/air mixture is forced along a different, narrower passage to the chambers which causes the mixture to flow faster. 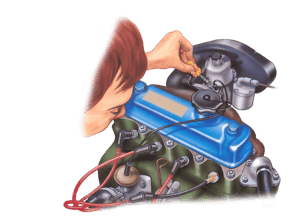 Tuning the engine with a colortune plug

Although some experienced mechanics can tune a car's carburettor fairly well by ear, to do the j...