A spongy feel or increased pedal travel as you apply the footbrake could indicate a leak or air bubbles in the hydraulic brake system.

If the level is low in the master-cylinder reservoir, the problem is a leak.

The master cylinder is usually mounted on or near the bulkhead of the engine compartment. The recommended fluid level is marked by a line on the outside of the reservoir.

If the reservoir is made of plastic, the level of fluid inside is visible; if it is metal, unscrew the reservoir cap and look inside.

A regular inspection of the fluid level is advisable - it could be your first warning if the leak is only a slight 'weep' in the system.

Any brake-fluid leak must be traced and remedied as soon as possible. Most likely sources are the seals of the master cylinder or, in a drum brake, the wheel cylinder.

Less likely - but not unknown - is a leak past a piston seal on a disc-brake caliper.

These unions are used to attach the piping to various components of the system, such as the master cylinder or the disc-brake caliper.

Inspect them carefully and feel behind them, too, in case the weep is not visible from the front. Tighten the nut if there is any evidence of leaking.

Have a helper press hard on the brake pedal when you inspect the system again - the extra pressure may reveal a slight leak that would not show otherwise. If it does, the joint is damaged and must be repaired professionally at a garage - drive there slowly.

If you fail to find a leak (and if [[bleeding the system|Article:56]] does not cure the problem) suspect an internal seal leak in the master cylinder or one of the slave cylinders.

Brake linings that have been contaminated by leaking hydraulic fluid or grease must be renewed (See Renewing drum-brake shoes). Do not attempt to clean them.

Furthermore, the linings on the opposite wheel must also be renewed, otherwise the stopping power of the two brakes will differ and you will have unbalanced, dangerous braking.

Brake shoes - or disc-brake pads - are always sold in 'axle sets', for either the two front wheels or the two rear ones. Never renew just one.

A hose clamp can often be used to pinpoint obscure faults in brake pipes - when, for example, there is a spongy feel to the pedal but no visible cause.

A hose clamp can often be used to pinpoint obscure faults in brake pipes - when, for example, there is a spongy feel to the pedal but no visible cause.

Use a hose clamp to seal off each flexible brake hose in turn.

When the feel of the pedal improves, the cause will be in the hose you have clamped, or the piping or components.

A bad leak from the wheel cylinder in a drum brake may show itself by streaks of fluid on the backplate, the wheel or sometimes the tyre wall.

Another indication can be the car's behaviour under braking. If it pulls to one side, that may mean the brake linings on the other side are contaminated with escaped fluid and not working properly.

When examining brake pipes and unions, do not overlook those that incorporate a pressure switch to work the brake lights.

Look also for a pressure-limiting valve - a device that governs the hydraulic pressure on the rear brakes, to balance the braking between front and rear.

Look for the pressure switch in the engine compartment - it will have wiring attached. The limiter will usually be underneath the car and at the back.

Where there is rust or corrosion, clean the pipe or union with a wire brush before inspection.

Surface rust only is not a problem, but deep pits in a pipe mean that it should be renewed. If brushing brings it up bright and smooth, it is usually sound.

But deep pitting weakens it seriously - the rust will return anyway and go on eating through the metal.

Renewing brake pipes is best eft to a specialist. If you do need to disturb any unions on older -.sars, take great care.

Often corrosion will have seized he union nut to the pipe or component. Attempts to loosen it 'nay fracture the pipe.

To prevent this, wire-brush the union, then soak it with penetrating oil. Leave it for an lour, then ease the nut loose very ;lowly, working it backwards and forwards a little at a time until you are sure it can be freed.

Be sure to use the correct spanner, as the nut is made of ;oft metal and easily damaged.

Badly rusted brake pipes will not pass a roadworthiness test.

Flexible brake hoses must be inspected with care. They have to withstand considerable pressure and any weakness can result in total brake failure.

Examine closely any hose that runs close to other components and may chafe against them; or me that may have been wrongly fitted, and is twisted or bent. Any loses so fitted should be repositioned. If there are signs of 'Mating, the hose must be replaced.

Taking a hose and bending it sharply may reveal dozens of tiny cracks in the casing caused by perishing, which might not show when the hose is straight. Whether leaking or not, such a hose is dangerous and should be replaced immediately.

A master-cylinder leak may be spotted by traces of fluid on the bulkhead or adjacent components in the engine bay. It may even leak down the toe board inside.

However, a slight leak may be revealed only when you peel back the rubber dust seal and look where the operating rod enters the cylinder. Renew a leaking cylinder (See Replacing a master cylinder and servo unit).

A fluid leak past the pistons in a disc-brake caliper is unlikely but possible. Check by removing the brake pad (See Renewing disc-brake pads). 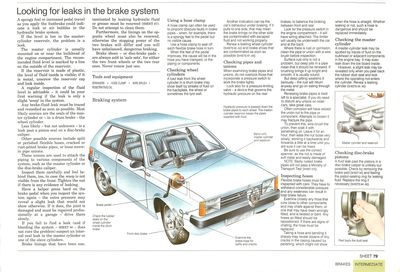 Most car manufacturers recommend renewing the hydraulic brake fluid every 18 to 24 months. The fl...