Drilling one or more holes in the car body is necessary for fitting extras such as an aerial, wing mirror or tow bar.

Although it is not difficult, mistakes are expensive. One slip of a power drill can cause significant damage to paint-work in a matter of seconds.

Before picking up a tool, plan exactly what you are going to do, and the best way to do it.

Never drill a hole without considering what is behind it, and so avoid accidents such as piercing the radiator when fitting a badge to the grille, the petrol tank when fitting a reversing light, or causing a short circuit when fitting an extra gauge.

Most holes can be made with a power drill and a suitable bit. Always use a small bit to start with, to make a pilot hole. For larger holes there are power-drill attachments such as cone-shaped grinders and cutters.

Metal cutters or punches can usually be hired from specialist firms. Where blades are fitted, make sure you have a supply of spares.

Car bodywork is curved and shiny, and scratches easily. To prevent the marking tool or drill sliding off course, put a cross of 1 in. (25mm) wide masking tape over the place to be drilled.

Carefully choose, measure and mark the exact spot lightly with a pencil. Use a hammer and a sharp centre punch to make a light indentation in the metal.

If your power drill has variable speeds, set it at a fast speed. Select a small bit, not larger than in. (3mm) to drill a pilot hole through the punch mark. The pilot hole will provide a centre for a larger bit.

Use a series of larger bits to drill the hole to the size needed. In general, each size of bit used should be no more than twice the diameter of the one before.

A nibbler or sheet-metal cutter is used for removing large areas of metal, such as cutting window apertures in the side of a van.

Mark the aperture in outline. By the method described, drill a tin. (6 mm) hole at any point just inside the aperture outline.

Insert the nibbler blade in the hole. When you squeeze the nibbler handles, the blade cuts a slot about 3/32 in. (2 mm) wide. Each squeeze advances the slot about lin. (6 mm).

The blade is very hard, but can easily snap when negotiating a corner. Make sure you have spare blades available.

A small tank cutter with an adjustable blade can be fitted to a carpenter's hand brace to cut a hole for an aerial or wing mirror.

It is not the easiest way of cutting a hole in a car body, and may prove less accurate for larger hole sizes. A round-hole punch is preferable.

The blade of a tank cutter can be adjusted to the diameter of the hole required. It revolves round the drill bit to cut out a circle of metal.

Start by drilling a pilot hole in the centre of the cutting circle. Keep the hand brace upright while cutting the hole.

A round-hole sheet-metal punch has two interlocking pieces that fit on each side of a metal panel to punch a fixed-diameter hole when tightened .

It can be used for aerial or wing-mirror holes. A different punch is needed for every hole size. Unless the punch blade is very sharp, it will crinkle the hole edges.

Mask the metal and mark the centre of the hole required. By the method described, drill a hole large enough to take the punch bolt.

Assemble one half of the punch on each side of the panel. Pass the bolt through to join them. Tighten the bolt to punch the hole.

To dismantle, undo the bolt and separate the halves.

A cone-shaped tapered grinder or cutter can be fitted to a power drill. It will make holes of different sizes up to the maximum of its diameter. Used at an angle it will make oval holes.

It is useful for making holes such as aerial or wing-mirror holes.

Mask the area and mark the outline of the hole. Drill a central pilot hole in the way described.

Enlarge it with the cutter or grinder until it reaches the outline mark. Be careful not to go beyond.

Do not try to speed up cutting by forcing the tool. The very thin metal often used for car wings will easily distort.

Enlarging a drilled hole with a file

Most aerials need a hole about 3/4in (19mm) across. It is impractical to drill a hole as large as this, but a smaller hole can be enlarged with a file.

Mask the area and mark the hole in outline. Drill a 10mm hole in the manner described.

Take a 6mm rat-tail file and wrap five or six layers of masking tape around the tip, overlapping it at the end.

The tape will prevent the file from damaging the paintwork if it accidentally slips from the hole while you are working.

Use the file vertically in the hole to enlarge it, working evenly around so as to get a true circle. 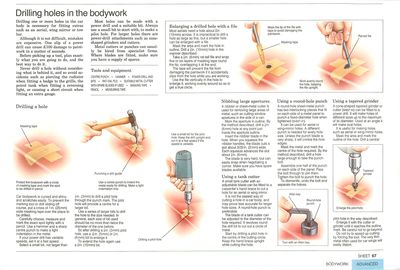