Mud and dirty water thrown up by the wheels is the principal cause of body rust on cars. If the underside is unsealed, keep underbody dirt to a minimum to reduce the chance of rust damage.

Dirt collects in corners and crevices, and absorbs water like a sponge. Impurities in the caked mud react with the metal and cause rust. Corrosive salt — put down in winter to prevent icing — is particularly harmful.

The most common areas of under-body rust are where dirt tends to stick, such as the front wings, particularly around the headlamps and the top rear corners just in front of the windscreen. Some cars also rust round the edge of the wheel arch.

Once caked dirt has been removed, hose the underside with a powerful jet at least once a month.

Cleaning under the wings

Loosen the wheel nuts and raise the car securely on to axle stands. Remove the wheels and cover the brake assemblies with plastic sheeting taped in place.

If the car has inner plastic mudguards which follow the curve of the wheel arch, the underwings need not be hosed. If mudguards are fitted only to the front wings, hose the rear wings.

Connect the hose firmly to a main tap and turn it full on. Adjust the nozzle to the most powerful jet, and aim the hose under a front wheel arch at the top rear corner.

As the water runs down you should see a river of dirt corning from inside the wing. Keep the hose trained on the area until the water runs clear. Repeat the treatment in the top front corner of the wing interior, around the back of the headlamps.

If the car has MacPherson-strut suspension, play the hose round the upper mounting to remove dirt packed round the spring seating.

To clean the wheel-arch ledge, put the hose inside the wing and train it on the ledge from above. Remove any other areas of dirt under the wing with the jet.

Repeat the procedure on the other wings.

Turn off the hose and inspect under the wings with a torch. Do not use an unprotected inspection lamp, as dripping water can shatter a hot bulb.

Look for any pockets of dirt. Use a chamfered wooden batten to poke dirt out from crevices and the wheel-arch ledge.

Remove the final film of dirt with a stiff brush dipped in hot water.

Most modern cars owe their structural strength to box sections - hollow metal struts - on the floor pan. Because box-section metal is thin, it can soon rust through, so makers provide drain holes to let out any water that seeps in.

On late-model cars, most box sections are sprayed inside with a wax rust inhibitor.

Drain holes may be round or narrow slots next to a welded seam. Make sure they are not blocked with sealant or dirt. If they are, use a piece of wire to clear them.

The box sections under the doors are the most likely to rust. Other box sections are those which provide mountings for suspension and steering parts and power units.

Most cars pick up a coating of oil on the underside of the floor.

To remove a heavy coating of oil, which could harbour moisture and dirt, brush or spray with an engine cleaner, and wash off with a hose.

Let a thin film remain. It will give some protection against rust.

If oil is dripping off, look for a leak.

Mastic-based sealant has good resistance to abrasion, and it is particularly useful for protecting the front underwings against stone chippings. In time it cracks or lifts, and water can seep underneath.

Waxy sealants give less protection against abrasion, but do not crack. If the surface is scratched, the surrounding sealant creeps in to cover the area again.

Many car makers now use a PVC coating. It bonds securely to the metal, does not crack and is very resistant to abrasion.

Regularly check the condition of the underbody sealant. If it is damaged it must be repaired to prevent rust. Try to use the same type of sealant - not all types are compatible (See Applying underbody sealant). 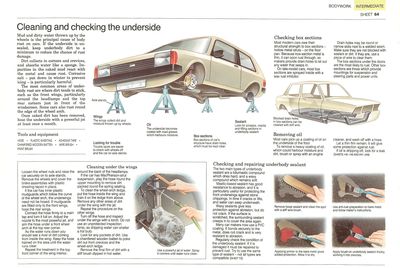 Before a door-trim panel can be removed, the window winder and interior handle must be taken off...